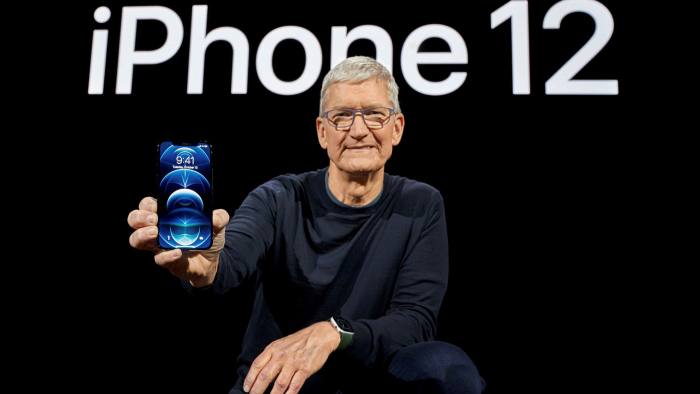 Apple introduced a redesigned line-up of iPhones enabled for 5G network speeds on Tuesday, promising to usher in a “new era” for its flagship product.

The four new 5G smartphones are intended to give customers a range of options as the $2tn company heads into a holiday quarter when it is expected to sell upwards of 80m phones.

“Every decade, there’s a new generation of technology that provides a step change in what we can do with our iPhones,” Tim Cook, chief executive, said. “The next generation is here.”

The flagship iPhone 12 with a 6.1-inch display starts at $829, or $130 higher than the starting price for iPhone 11 — a move likely to please investors keen on seeing a higher average selling price. It also unveiled an iPhone 12 “mini”, a 5.4-inch model starting at $699.

The new iPhone line-up is rounded out with two Pro models, one with a 6.1-inch display and a Pro Max model at 6.7 inches — the largest display yet for an iPhone.

All four models have a new hardware look with flattened edges, the first such change to the phone’s design since the iPhone X in 2017. They are also the first handsets to use chips produced using the cutting-edge 5 nanometre manufacturing process.

Apple stock, which rallied 6 per cent on Monday, fell 2.7 per cent on Tuesday, suggesting investors were disappointed that the company did not introduce long-rumoured accessories including over-the-ear “Studio AirPods” and lost-items tracking tags.

Apple also said the iPhone 12 Mini and Pro Max models would not be available for pre-order until November 6, and in store until November 13. Citigroup analyst Jim Suva said he was disappointed by the delay. Production was hit earlier this year by the coronavirus pandemic.

The only main hardware product Apple revealed beyond the iPhone was the HomePod Mini, a smaller, oval-shaped home speaker equipped with Siri, which it will sell for $99. Apple has just 1 per cent market share among smart speakers, according to IDC, the market intelligence group.

Analysts expect the 5G phones to spark a massive upgrade cycle, as customers typically own their devices for about four years. Although 5G infrastructure is not yet widely available in many regions, the phones select 4G whenever it is not available or, to save battery power, when the speeds are not necessary. While Apple’s first 5G phones are coming more than a year after rivals Samsung and Huawei, it could help make the network more mainstream.

To coincide with the launch of the phones, Hans Vestberg, Verizon chief executive, announced the company would initiate its 5G network on Tuesday, following rivals T-Mobile last December and AT&T in the summer. “5G just got real,” he said.

However, Gene Munster at Loup Ventures estimated that Verizon’s advertised download speeds — up to 4 Gigabits per second in ideal circumstances — would only be available to 1 per cent of the US population. He estimated it would ramp up to one-quarter a year from now.

This underscores how consumers may be confused and ultimately frustrated by the slow and sporadic deployment of 5G. The technology is likely to have a major impact on futuristic trends such as self-driving cars, but for average users it remains a questionable proposition.

“What else can I do with my 5G iPhone that my 4G iPhone does not do?” asked Francisco Jeronimo, researcher at IDC. “Unfortunately, not even Apple has that answer yet.”

More than 100 mobile operators across more than 35 markets would carry the 5G devices when the first new iPhones were released later this month, Apple said.

“The introduction of 5G technology to the iPhone range gives people a meaningful reason to upgrade and makes buying an iPhone this time around a future-proof purchase,” said Ben Wood, analyst at CCS Insight.

Apple now has a wide range of phones for the holiday season, from the cheaper iPhone SE released earlier this year, to the $1,399 Pro 12 Max with 512GB of storage.

“Apple has a very clean portfolio of devices that offer a ‘good, better, best’ choice for consumers,” Mr Wood said. “It’s not so straightforward with rival products, where there are vast line-ups with lots of tiny differences and a variety of designs and features.”